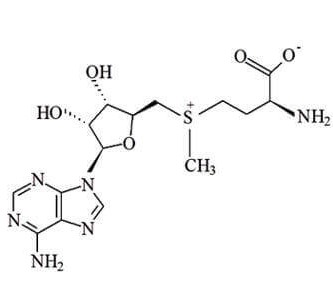 S-adenosylmethionine (SAM, also known as AdoMet, SAMe, and SAM-e) is an important molecule that is found in all living organisms. Three important biochemical pathways involved in SAM are transmethylation, transsulfuration, and aminopropylation. SAM is the principal biological methyl donor, as well as the precursor of aminopropyl groups utilized in polyamine biosynthesis. SAM is probably second only to ATP in the variety of reactions for which it serves as a cofactor. In most cases, SAM reacts by transferring the S-methyl group to a possible acceptor in transmethylation reactions. Given the critical role of methylation in determining cellular processes ranging from gene expression to membrane fluidity and polyamine requirements for cell growth, any changes in SAM availability could have profound effects on cell growth, differentiation, and function.

Synthesis and Degradation of SAM

SAM is synthesized from ATP and methionine (Met) in two consecutive reactions by methionine adenosyltransferase (MAT, also known as S-adenosylmethionine synthetase or AdoMet synthetase). In unusual reaction, the adenosyl moiety of ATP is transferred to methionine, forming a sulfonium ion which is a high energy reagent and can easily transfer its methyl group to a large variety of acceptor substrates including nucleic acids, proteins, phospholipids, biologic amines, and a lot of small molecules. Under normal conditions, most of the SAM generated is used in transmethylation reactions in which methyl groups are added to compounds and SAM is converted to S-adenosylhomocysteine (SAH).

SAH is a potent competitive inhibitor of transmethylation reactions. Both an increase in SAH level and a decrease in the SAM level or ratio of SAM to SAH could inhibit transmethylation reactions. The reaction that converts SAH to homocysteine and adenosine is reversible and catalyzed by SAH hydrolase. In vivo, the reaction proceeds in the direction of hydrolysis only if the products, adenosine and homocysteine, are rapidly removed. There are three pathways to metabolize homocysteine, one of which is the transsulfuration pathway which converts homocysteine to cysteine. In the transsulfuration pathway, homocysteine and serine are condensed to cystathionine under the catalysis of cysteine β-synthase. Then cystathionine is catalyzed by γ-cystathionase to form cysteine.

SAM is essential for cell growth and repair, and provides the methyl group in the production of essential biomolecules, including:

In order to understand the abnormalities of transmethylation reactions, it is important to assess SAM and SAH levels and the ratio of SAM to SAH. The SAM/SAH ratio is considered as a key indicator of methyl flow from SAM to methyl receptor in cells. The intracellular SAM level is affected by the availability of methionine, the utilization of SAM for polyamine synthesis and the type of MAT. SAH levels are largely determined by its subsequent metabolic pathways.

The transsulfuration pathway is tightly interconnected with the transmethylation pathway via methionine and its metabolites. The transsulfuration begins with SAH, which is the residual structure of SAM upon transferring methyl group out of SAM. SAH is hydrolyzed to produce homocysteine, which is converted in sequence to cystathionine, cysteine, and finally glutathione (GSH). Due to the low dietary cysteine content and the fact that up to 80% of dietary cysteine loses its sulfhydryl groups through the gastrointestinal tract, SAM is the main source of cysteine. Cysteine plays essential role in protein synthesis and is a component of the major antioxidant GSH. Cysteine itself is also a potent antioxidant. Antioxidants protect the body from damage by reactive oxygen molecules in the body, which may come from internal or environmental pollution and are thought to play a role in the aging process and the development of degenerative diseases. It has been found that disruption of cysteine and GSH metabolism is often associated with abnormal redox homeostasis and neurodegeneration.

Aminopropylation is a metabolic pathway initiated by SAM through decarboxylase. The decarboxylated SAM binds with putrescine to produce spermidine and spermine, which are essential for cell growth, differentiation, and DNA and RNA stability. During the aminopropylation process, methylthioadenosine (MTA) as a byproduct of polyamine synthesis is generated. MTA is supportive of cartilage matrix production and has powerful anti-inflammatory and analgesic properties.

SAM is considered to be helpful for the following conditions:

There are also limited research supporting the role of SAM in the following conditions:

SAM has been widely used over the counter to relieve depression, osteoarthritis, and other conditions. It is also necessary to understand the effects and consequences of SAM as a daily nutritional supplement.

SAM is an intrinsically unstable molecule and its optical density maximum of 258-260 nm is not a distinguished absorption, making it challenging to determine the concentration of SAM in various biological fluids and tissues. A simple, convenient method that does not require expensive instrumentation (LC, MS, and combination) is desirable for determining the biological concentration of SAM and monitoring its changes and metabolic pathways in body fluids, tissues, and organelles.

Amerigo Scientific offers a range of research reagents and kits for studies related to methionine cycle, in which SAM and SAH are key intermediates. The methionine cycle is a critical biochemical pathway that is conserved throughout evolution in all organisms. Our anti-SAM and anti-SAH monoclonal antibodies have high titer, affinity, and specificity. We also provide verified SAM or SAH conjugated with tracer molecules to study biomolecular interactions and develop further assays.