Induced pluripotent stem cells (iPSCs) are reprogrammed from somatic cells and possess properties of self-renewal and differentiation to many types of cell lineage. iPSCs can therefore replace embryonic stem cells (ESCs) in research and clinical use, and may overcome various ethical issues associated with the use of embryos. The applications of iPSCs in regenerative medicine, disease modelling, and drug discovery are enormous. The models of various diseases by using iPSCs could lead to a better of their etiology, which maybe further utilized for developing putative treatments for these diseases. Toxic compounds, new drugs in development, hazardous chemicals, or environmental conditions can be evaluated by iPSCs for their toxicity and effects. iPSCs can also be used to produce patient-specific cells that can be transplanted into sites of injury or tissue degeneration. Using iPSC therapy could eliminate the chances of immune rejection.

In theory, iPSCs can be generated from any somatic cell with the appropriate reprogramming method. Cells from different sources such as fibroblasts, cord blood, peripheral blood can be reprogrammed to produce iPSCs. The entire process of iPSCs generation can be summarized into three main steps, including establishment of initial cell culture, induction of iPSCs, and characterization and expansion of iPSCs. In the first step, the source cells are isolated and cultured. Then, the reprogramming factors are introduced into those cultured cells. There are two ways to introduce reprogramming factors. One is an integrated system using retrovirus, lentivirus, or induced lentivirus, and the other is a non-integrated mothed using non-integrated viral vectors (sendai virus, adenovirus), plasmid DNA transfer, transgenes, recombinant proteins, or synthetic mRNAs. iPSCs are generated after expression of reprogramming factors under appropriate medium conditions. The cultured iPSC colonies can be characterized by either morphological examination or detection of expression of cell surface proteins (SSEA-4, alkaline phosphatase) and transcription factors (Oct4, Sox2, and Nanog).

The insertion of any genetic material other than iPSC transcription factors into newly generated iPSCs is a serious impediment for iPSCs to develop accurate disease models and therapeutics. Protein-based iPSCs generation method eliminates possible genomic mutations and insertions associated with DNA transfection or viral transduction.

The following human iPSC reprogramming factors are produced by transfection in HEK293 cells. Poly-Arginine protein penetrating domain (PPD) at the C-terminal end of each protein enables efficient transduction of the protein into any cell type.

Although crude reprogramming protein lysates have been shown to be used for iPSC generation, the efficiency is extremely low. Purified iPSC proteins from a mammalian expression system would be an ideal choice. Amerigo Scientific offers purified iPSC proteins expressed from E. coli with proven functionality. These purified recombinant proteins contain a 6X His tag at N-terminus for purification and 9X poly-Arginine at C-terminus for cell membrane penetration.

The minicircle DNA (mc-DNA) is an independent mammalian expression cassette that does not contain any bacterial DNA elements required for plasmid production. mc-DNA is generated by intramolecular recombination catalyzed by the ΦC31 integrase, which is expressed by a special host E.coli bacterial strain together with the I-SceI endonuclease. mc-DNA differs from conventional plasmid vectors in that it lacks an origin of replication and an antibiotic selection marker. Thus, this expression cassette has a lifespan of more than 3 weeks and exhibits high expression levels. In addition, non-integrating mc-DNA is degraded, so the target gene is not expressed. mc-DNA is an ideal vector for reprogramming, because it is more efficient than iPSC proteins and has non-integrating nature that lentiviral vectors do not.

Amerigo Scientific offers endotoxin-free mc-DNAs containing human or mouse Yamanaka or Thomson sets driven by a CMV or EF1α promoter. Our mc-DNA vectors are xeno-free plasmids without any sequence of bacterial or viral and are ideal for generating iPSCs. The CMV promoter is a target for methylation, and the methylation of CMV promoters often leads to gene silencing, which compromises efficacy of iPSC induction. The mc-DNA that contains the mammalian EF1a promoter rather than the viral CMV promoter requires only simple transfection and the transgene expression can be easily monitored with GFP. 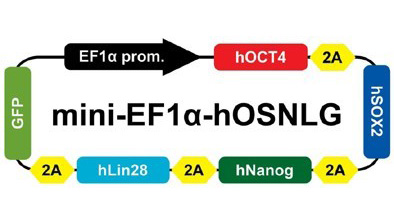 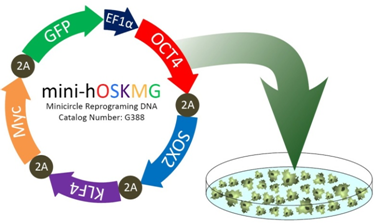 Transfection of mc-DNA to induce iPSC

Characterization and isolation of iPSCs rely on morphological criteria and skilled stem cell culture expertise. To facilitate these efforts by less experienced or novice laboratories, Amerigo Scientific offers accurate pluripotency reporter systems that can be transduced efficiently into somatic cells. The EOS element is a combination of the strong long terminal repeat (LTR) promoter from an Early Transposon (ETn) that is highly transcribed in embryonic stem (ES) cells with Oct-4 and Sox2 binding motifs in ES cell–specific enhancers. The EOS element is a newly identified promoter that overcomes vector silencing and specifically marks pluripotent stem cells. Our EOS lentiviral and adenoviral vectors are highly sensitive and universally applicable vectors for immediate identification of iPSCs.