Promotion of autophagy and glutaminolysis via stabilization of glutaminase by BAG3

BAG3 is a protein involved in the regulation of various cellular functions, such as apoptosis, cell differentiation, and macroautophagy, etc. In cells overexpressing BAG3, glutaminase (GLS) succinylation is promoted, which prevents ubiquitination and subsequent proteosomal degradation, stabilizing the GLS protein. Stabilization of GLS promotes glutaminolysis, which in turn increases glutamine consumption. This results in increased intracellular glutamate and increased intracellular α-ketoglutarate, an intermediate product of glutamine metabolism. Accelerated glutaminolysis produces ammonia in the culture medium, which contributes to the activation of autophagy. For cancer cells with enhanced glutaminolysis, BAG3 has been suggested as a potential target for cancer therapy.

*BAG3 is a protein that is ubiquitously distributed in human tissues and is induced by various stresses. BAG3 is a protein involved in the regulation of various cellular functions and is also associated with cancer and age-related neurodegenerative diseases. 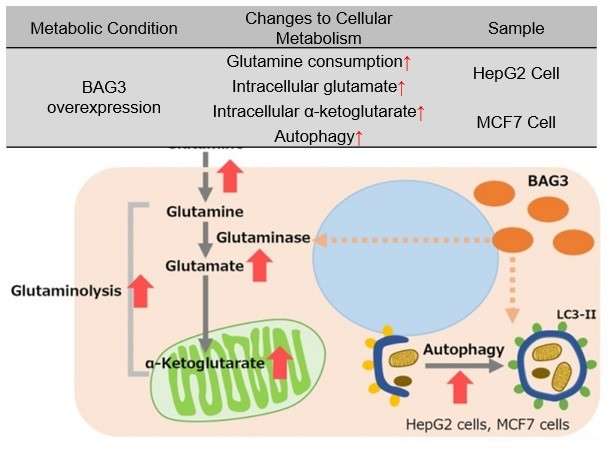