Cellular senescence is a stable and terminal state of growth arrest in which cells are unable to proliferate despite optimal growth conditions and mitogenic stimuli. Cellular senescence occurs in response to many different triggers, including DNA damage, telomere dysfunction, oncogene activation and organelle stress, and has been linked to processes such as tumor suppression, tissue repair, embryogenesis and organismal ageing.

Despite the decline in their proliferative potential, senescent cells display a high metabolic activity. In presence of high oxygen levels, senescent cells can acquire a more glycolytic state. There is mounting evidence that studying metabolic reprogramming is critical to understand specific activities related to the senescent state.

Relationship Between Senescence-Related Diseases and Lactate/NAD+

Recently, the relationship between NAD+ and senescence has been attracting attention. In the mouse aging model, a decreased amount of NAD+ was observed in the liver and other organs, whereas inhibition of NAD+ synthase has been reported to induce senescence-like decline in various cellular functions. Additionally, it has been suggested that a decrease in in NAD+ levels lead to decreased mitochondrial function, whereas a decrease in mitochondrial function has similarly been suggested to lead to a decrease in NAD+ levels and a senescence-like decline in cellular function.

The increase in lactate due to decreased mitochondrial function is closely related to the pathological development of senescence-related diseases, such as cancer and diabetes. Therefore, it is becoming increasingly important to analyze changes in NAD+ and lactate to unravel their relationship with senescence. 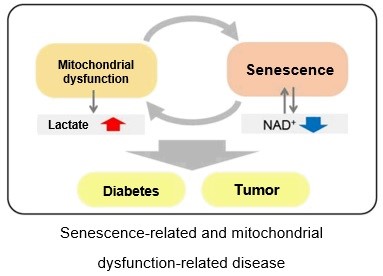 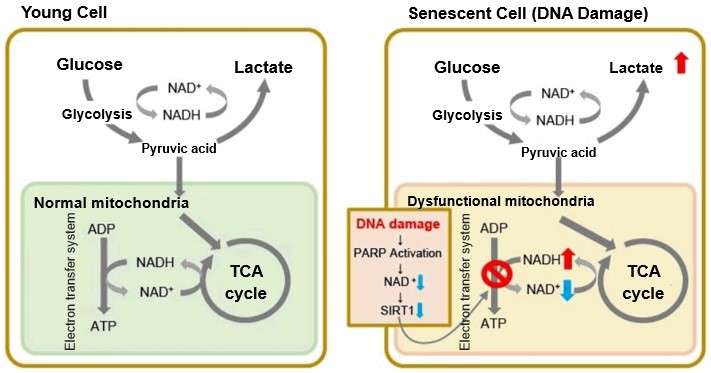 Menin is a tumor suppressor that plays an important role preventing T cell dysfunction from aging and fatigue. When menin is deficient, mTORC1 is activated, and oxidative phosphorylation via glycolysis and glutaminolysis is enhanced, leading to CD8 T cell dysfunction. Additionally, α-ketoglutarate, an intermediate product of glutamine metabolism, maintains the activation of mTORC1 and contributes to the promotion of cellular senescence (increased SA-β-gal activity). It has been suggested that the glutamine-α ketoglutarate pathway plays an important role in the induction of CD8 T cell dysfunction and that menin may inhibit T cell senescence. 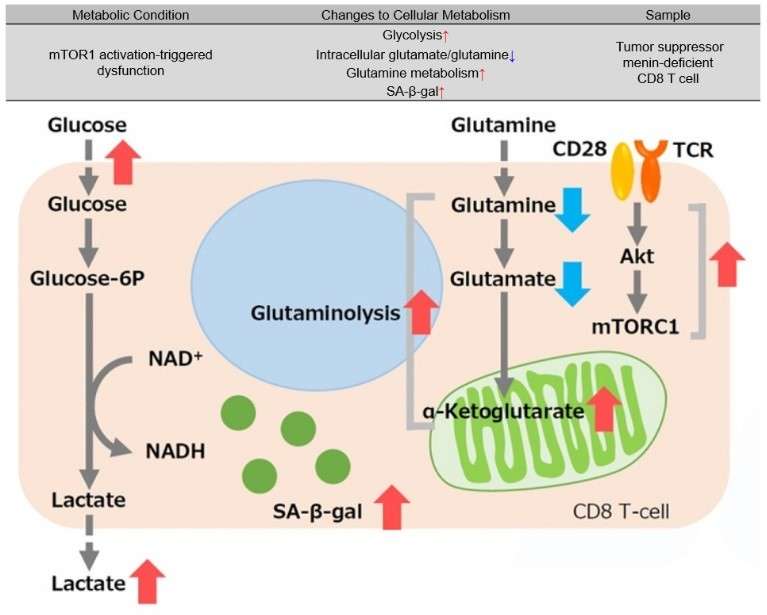