The cellular microenvironment plays a crucial role in cell morphology, growth, proliferation, and migration. Extracellular matrix (ECM) is an intricate network composed of extracellular macromolecules and minerals, providing essential physical scaffolding for the cellular constituents and initiating crucial biochemical and biomechanical cues that are necessary for tissue morphogenesis, differentiation and homeostasis.

In traditional two-dimensional (2D) cell culture systems, cells are cultured in flat dishes, flasks, or tubes with nutrient media. Cells mostly grow as monolayers and these flattened cells can only receive cellular signals on their ventral surfaces. In addition, the lack of cell-cell and cell-extracellular matrix interactions may alter cell morphology, develop abnormal polarization, and deviate phenotypic expression and/or genotypic characteristics. The physiology of cells cultured in vitro in three-dimensional (3D) systems resembles that of their counterparts in vivo much better than the physiology of cells cultured in conventional 2D culture systems. Over the past few decades, a wide variety of materials have been developed to culture cells within 3D ECM mimics to circumvent the limitations of traditional 2D cell culture.

Hydrogels are considered as a highly attractive material for developing 3D analogs of native ECM, due to their ability to simulate the nature of most soft tissues. Hydrogels are hydrophilic 3D cross-linked polymeric networks consisting of interconnected microscopic pores. These networks possess high water contents, which facilitates the transport of oxygen, nutrients, and soluble factors. Furthermore, hydrogels can be formed under mild and cytocompatible conditions and can be easily modified to possess cell adhesion ligands, as well as the desired viscoelasticity and degradability.

Amerigo Scientific offers 3-D Life hydrogel products for generating biomimetic hydrogels for 3D cell culture. The 3-D Life biomimetic hydrogels consist of a polymer functionalized with thiol-reactive groups and a thiol-containing crosslinker. The chemical cross-linking reaction is non-toxic to cells and occurs rapidly at ambient temperature to prevent cell settlement before the gel is formed.

The procedure for setting up 3-D Life hydrogels containing embedded cells is very simple and does not require specific equipment or chemical expertise. 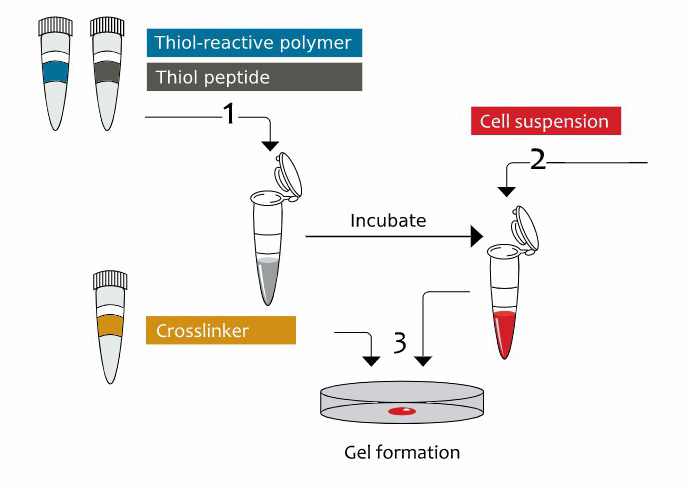 Polyvinyl alcohol (PVA) or dextran can be used as thiol-reactive polymers. PVA polymer-based hydrogels are stable and cannot be degraded. In contrast, dextran-based hydrogels can be degraded by glucanases, so that cells can be isolated from such hydrogels for further use. Both polymers can be cross-linked with polyethylene glycol (PEG-Link, which cannot be degraded by cells), a polyethylene glycol peptide conjugate (CD-Link, which contains a matrix metalloproteinase-cleavable peptide that allows cells to cleat the cross-link and diffuse and migrate in gels), or HyLink (a hyaluronic acid crosslinker). The thiol-reactive polymers and the thiol-containing crosslinkers may be freely matched and mixed to produce a gel of defined properties.

PVA, dextran and PEG are water-soluble polymers that do not bind to cells and do not interfere with cellular functions. Thus, our 3-D Life hydrogel components support cells in an inert gel, which provides an ideal basis for the addition of bioactive factors such as adhesion peptides, extracellular matrix proteins, or their fragments to analyze cell phenotypes. 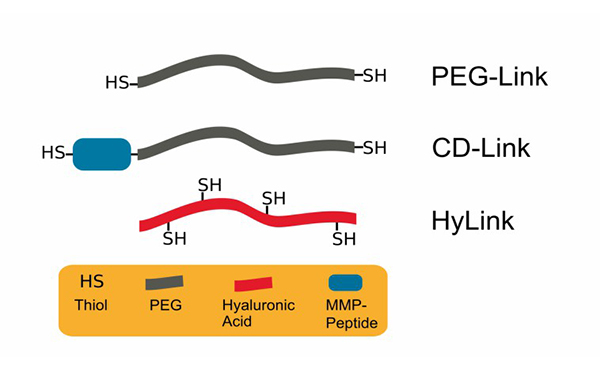 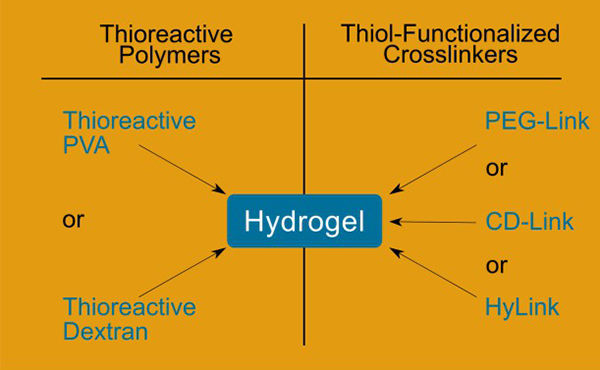 For fast gelling hydrogels, PVA or dextran is functionalized with sufficient thiol-reactive maleimide groups along their backbone for modification with bioactive factors and for crosslinking. Maleimides react specifically and very rapidly with thiol groups, so hydrogels can be formed within a few seconds.

For slow gelling hydrogels, PVA or dextran is functionalized with thiol-reactive groups which react at a slower rate with thiol groups than maleimides, but with a similar reaction mechanism.