Liposomes are spherical artificial vesicles consisting of one or more lipid bilayers. Liposomes are utilized to increase stability, solubility, bioaccessibility, and bioavailability of bioactive compounds, and to provide targeted delivery and controlled release in food, pharmaceutical, and cosmetic industries, due to their structural versatility, biocompatibility, biodegradability, non-toxic, and non-immunogenicity nature.

Synthetic phospholipids are produced from natural lipids. Modification in head groups, aliphatic chains and alcohols of natural phospholipids creates a variety of synthetic phospholipids, that have proved to be more stable, such as 1,2-Distearoyl-sn-glycero-3-phosphocholine (DSPC), 1,2-Dipalmitoyl-sn-glycero-3-phosphocholine (DPPC), and 1,2-Distearoyl-sn-glycero3-phosphoethanolamine (DSPE). DPPC can be used to prepare temperature-sensitive liposomes as the primary lipid. Because DPPC membranes undergo the phase transition at 41℃, DPPC based liposomes release encapsulated molecules at this clinically attainable temperature.

In addition, the stability difficulties of liposomes can be solved by surface modification of the liposomes with amphipathic polyethylene glycol (PEG), coating liposomes with chitin derivatives, freeze drying, polymerization, etc.

Amerigo Scientific offers a wide range of liposomes of different components, modified liposomes, and other liposome research tools to meet the needs of drug delivery and other scientific research applications:

Amerigo Scientific offers liposome products that encapsulate ions or biomolecules for delivery of the ion or biomolecule across the cell membranes.

Disruption of cell membranes that are composed of lipid bilayers leads to dramatic biological effects. For example, pore-forming cytotoxins disrupt the cell membrane permeability causing the release of inflammatory cytokines and tissue damage. The Lipid Bilayer Permeability Disruption Assay employs a liposome-encapsulated dye to monitor the release of the dye due to damage of the integrity of the lipid bilayer. Since liposomes have the bilayer structure similar to cell membranes, this dye-releasing assay may be used to test compounds that disrupt the permeability and damage cell membranes. The released dye is monitored by fluorescence at 580 nm (excitation at 540 nm). It is a high throughput assay using 96-well plates and is suitable for screening of compound collections.

The liposome bilayer is composed of lipids HSPC: cholesterol: DSPE-PEG2000 (3:1:1 mass ratio) which is the same as the lipids for an existing liposomal drug in clinic. The dye is rhodamine conjugated with diethylenetriamine and its fluorescence is quenched inside of the liposome. When the bilayer permeability is disrupted, the encapsulated dye is released and the fluorescence is generated in the presence of the color development agent outside of the liposome. 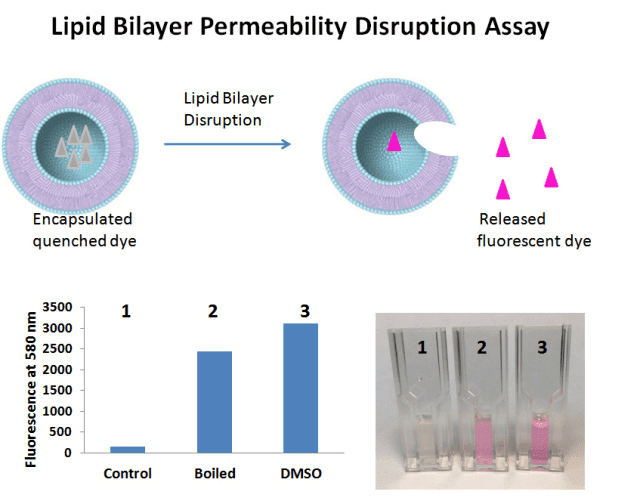 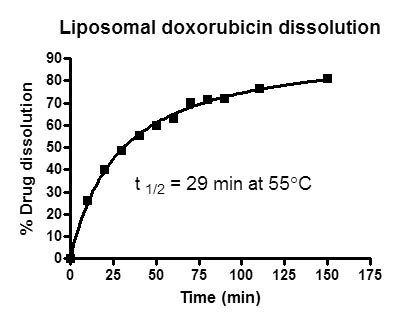 Liposome-formulated drug samples may contain free (non-encapsulated) drug molecules that are not encapsulated within the liposomes. Encapsulated drugs may leak out of liposomes during storage or due to exposure of the liposomes to organic solvent, ultrasound vibration or freezing or elevated temperatures. During production of liposomal drugs, drug loading may not be complete leaving certain percentage of the drug non-encapsulated. The Liposome Drug Encapsulation Assay kit (Catalog number LDE10) is designed to analyze the percentage of drug encapsulation in liposomes. 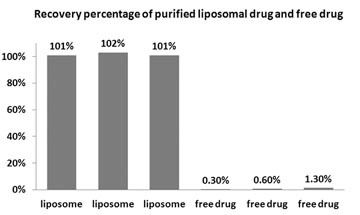 The columns are pre-packed in water and specifically designed for removal of free drugs in a liposome sample. Removal of the free drug is nearly complete. A minimal number of liposomes may also bind to the column. For liposomal drug encapsulation and liposomal drug dissolution tests, please use assay kits specifically designed for drug encapsulation assays (Catalog number LDE10) or drug dissolution assays (Catalog number LDD10).