Glycolysis is a metabolic pathway that converts glucose to pyruvate and produces both ATP and NADPH. Biosynthetic intermediates in glycolysis can directly enter pentose phosphate pathway (PPP) to promote cell growth and proliferation. In the presence of oxygen, pyruvate generated from glycolysis can be transported to the mitochondria, where it is converted to acetyl-CoA. However, under hypoxia conditions pyruvate is reduced to lactate and the free energy carrier NAD+ is generated.

In addition to glucose, lipids are the main energy source in cells. Through fatty acid β-oxidation, lipids are broken down to produce acetyl-CoA to generate energy. Long-chain fatty acids are transported to mitochondria by the carnitine acyltransferase (CAT) system. Acetyl-CoA produced from glucose or fatty acid β-oxidation is oxidized in a series of reactions in the tricarboxylic acid cycle (TCA) to produce ATP and CO2.

Cell metabolism can reflect the health status of the cell. Deregulation of cellular metabolism is associated with cancer, diabetes, senescence, non-alcoholic steatohepatitis (NASA), and other diseases. Analyzing the various cellular metabolic pathways, such as the glycolysis system, the TCA cycle, and the electron transport chain, is important in attempting to understand cellular states. Metabolites and energy sources such as glucose, lactate, and NAD(P)+/NAD(P)H are the indicators used for analyzing intracellular metabolism. 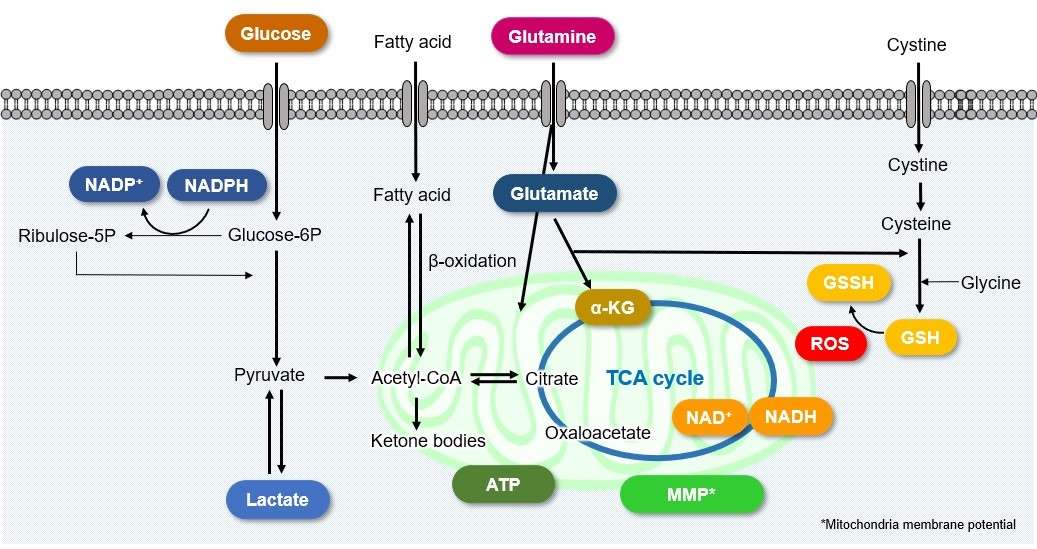