Airlift bioreactors are one type of pneumatically agitated bioreactors and contain a draft tube (internal loop) or an external loop. In the airlift bioreactors, bubble coalescence is prevented by directing them in one direction, and shear stresses are distributed more evenly throughout the reactor, thus providing a more favorable environment for cell growth. In addition, the cyclical movement of fluid is enhanced to increase mass and heat transfer rates. Compared with traditional systems, one of the main advantages of airlift bioreactors is that the cost associated with agitation and aeration can be substantially reduced. Other advantages include ease of scale-up, simplicity of construction, low risk of contamination, efficient gas-liquid dispersion, and low power consumption. Due to these advantages, airlift bioreactors have been widely used in aerobic fermentation, biological wastewater treatment, production of single cell proteins, and cell culture. 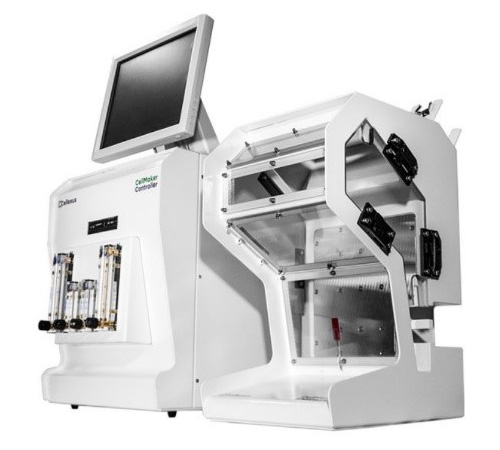 The patented airlift technology used by CellMaker bioreactors eliminates the need for mechanical mixing and instead uses bubbles to move cells and nutrients, providing optimal aeration for rapid cell growth. This mothed of gentle agitation is suitable for microbial fermentation and cell culture. Dissolved oxygen and pH regulation, as well as accurate temperature control can be achieved optimally. The integrated heater/cooler allows temperatures from 16°C-40°C without the need for external equipment.

CellMaker single-use airlift technology uses disposable bioreactor bags to reduce the risk of culture contamination and the downtime between operations. CellMaker bioreactors can work in volumes ranging from 1.5L to 50L, offering a relatively low footprint with stand-alone, compact systems.

Amerigo Scientific offers Regular, Plus and Low Flow CellMaker Controllers available with working volumes from 1.5L to 50L. CellMaker bioreactor systems are designed to improve and simplify your cell culture and fermentation processes with batch-to-batch reproducibility and volume efficiency.

The CellMaker Plus system enables excellent mixing and aeration suitable for both oxygen hungry and anaerobic bacterial culture processes. Using CellMaker is very effective in culturing bacteria for growth and reduces downtime and required cleaning.

The CellMaker Plus is also efficient at growing yeast and proven on strains, such as P. pastoris and brewer’s yeast.

The CellMaker Plus system can be customized to run a photo-dependent fermentation allowing for the growth of microalgae cells.

The CellMaker bioreactor systems are designed based on a patented airlift technology to accelerate and simplify the bacteriophage amplification process and increase the level of amplification. CellMaker has been successfully used to produce bacteriophages from Escherichia coli, Salmonella, Listeria, Pseudomonas aeruginosa, Staphylococcus aureus, and Yersinia ruckeri.

The CellMaker system automates the process of cell culture and produces repeatable results at the touch of a button. Temperature, pH and dissolved oxygen are easily monitored and controlled with built-in probes, and visual inspections are quickly performed through a transparent front panel.

The production of recombinant antibodies is a labor-intensive process with a high risk of contamination. Due to the use of sterile and disposable bioreactor bags, CellMaker systems allows for fast turnaround with minimal downtime and no risk of contamination. CellMaker has been used for recombinant antibody expression in CHO cells and has also been used to grow hybridoma cell lines for the production of monoclonal antibodies.