Three-dimensional (3D) matrices work as mechanical platforms for cell attachment and growth to mimic the extracellular matrix (ECM) surrounding cells in their biological environment. Compared with cultured on 2D substrates, cells cultured in 3D matrices exhibit a higher rate of cell adhesion, with a similar morphology as shown in vivo. Depending on their physicochemical and mechanical properties, 3D matrices can be classified as solid scaffolds and hydrogels. These matrices are usually composed of natural polymers such as collagen, gelatin, fibrin, or polysaccharides.

In addition to serving as a passive support for cell culture, 3D matrices can be as biomolecular delivery devices. Genetically modified cells embedded in 3D matrices could be used for achieving delivery of biomolecules. There is a requirement for active supports that could genetically modify the cells during their colonization onto the 3D scaffold or into the hydrogel. The combining scaffolds or hydrogels and plasmid delivery systems can be called ‘gene-activated matrices’ (GAMs). Gene delivery from GAMs presents several advantages over traditional transfection, owing to the 3D support in which the genetic modification occurs and the support itself protects the lipoplex from serum nuclease and clearance. As gene delivery is localized within the matrix, there is no systemic distribution of lipoplexes and thus off-target effects are reduced, while lower dose is required to achieve high cell transfection. Sustained release of lipoplexes from the support also enables long-term expression of the transgene.

Amerigo Scientific offers novel transfection reagents to allow direct in situ transfection of cells seeded on or into 3D scaffolds and hydrogels. These biodegradable reagents show good compatibility with the most common types of polymeric supports and enable transfection of a wide range of mammalian cells of various origins. The transfection reagents offer the possibility to realize matrices providing a mechanical support for both cellular growth and gene modification and present potential applications from vasculogenesis to regenerative medicine.

The 3D-Fect™ transfection reagent is specifically designed to bind and cover any type of 3D scaffold. It can be used to efficiently transfect DNA, shRNA, siRNA, and other nucleic acids. si3D-Fect™ is an optimized reagent for siRNA experiments on 3D-scaffolds.

The 3D-FectIN™ transfection reagent is compatible with any hydrogel and allows transfecting cells directly cultured onto/into a hydrogel with a high efficiency. The product does not alter gelation or polymerization. It is suitable for all nucleic acids and is adapted to all cell culture conditions. si3D-FectIN™ is an optimized reagent for siRNA experiments on 3D-hydrogels.

Based on a new technology, the 3D transfection reagents enable genetically modified cells to be cultured directly in a 3D environment. 3D Transfection allows for a long-term transgene expression (intracellular or secreted) or gene silencing.

First, the nucleic acids (DNA, siRNA) are mixed with the 3D transfection reagent to form complexes. Then, those complexes are combined with the appropriate 3D matrices. Finally, the cells are transfected while colonizing the scaffold or invading the hydrogel. 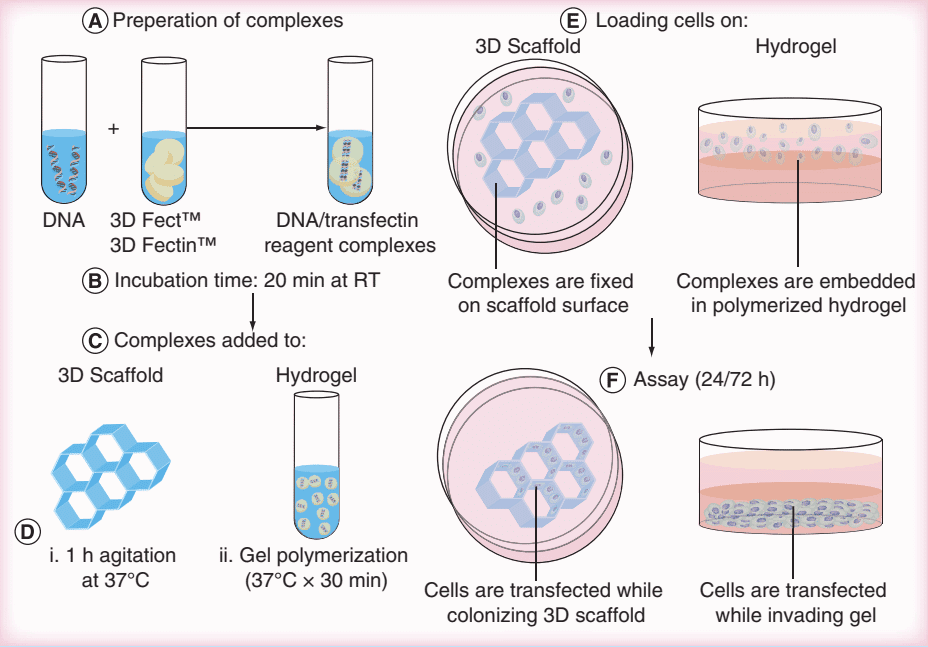